A Few Words About Us

Hallman Homestead is a micro farm that raises produce, layer hens, and ADGA registered Nigerian Dwarf Goats on a little under 3 acres in Northwest Ohio.

Our homesteading adventure as a married couple with three kids began when we moved here in 2015, but the connection to this property began much earlier when my (Rebecca’s) parents bought the farm in 1986. They lived and raised a family in the farmhouse, but the barns and outbuildings were mainly used for storage. After my father passed away in 2003, my mother considered selling the property, but didn’t, and even offered it to Jarred and me several times after we were married in 2006.

In 2014, Jarred and I were living near Philadelphia, Pennsylvania, raising three children in a house apartment, and wanting to buy a home of our own. However, we were having a hard time finding a house that was affordable, but still large enough for a family of five. When a work opportunity came up within a 40 minute drive of the Willshire farm, it seemed like God himself was giving us clear direction that we should take my mother up on her offer to sell us the farm. and so we moved. one week from Thanksgiving day, 2014, to our new homestead.

In 2015, we began “homesteading” with a small garden and a flock of seven chickens. They say chickens are the gateway drug for homestead animals. That was definitely true for us. By the next year, we also had ducks and meat rabbits and meat hens. Then in 2017, after a TON of research, we invested in a small herd of registered Nigerian Dwarf goats. 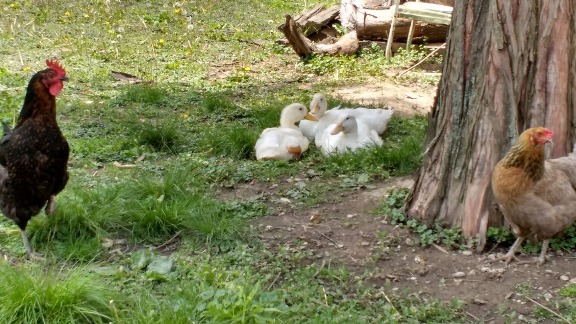